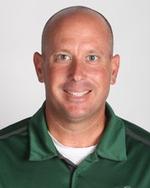 Chase Wooten is currently in his 12th season as head coach of the Northeastern State women’s soccer program. He was named to the position in January 2010 and is the third person to serve in this capacity since the sport was added in 1996. In 2018 the RiverHawks had another successful season, with a win over a top 5 nationally ranked team in the country.  Advancing for post season for the 7th time in row.

In 2019 NSU finished second in league play and loosing in the conference finals in pks - earning a NCAA tournament bid, in 2021 spring NSU finished as the tops side of league play.

Wooten has taken the program to new heights since arriving at NSU.  He has led the RiverHawks to the five best defensive seasons in school history, including a 2013 team that conceded a program-low 14 goals. The 2010 team allowed just 17 goals, and the 2015 side conceded just 18. The other two top defensive units in school history were also under Wooten’s watch (2011-12). Wooten has guided Northeastern State to winning seasons in five of his first six campaigns, which marks the greatest stretch in school history. Prior to Wooten's arrival, NSU had just four years with double-digit victories. He has led the RiverHawks to four such occurrences in his six years at the helm. The 2013 team broke the school record with 15 wins, while the 2015 club is second with 14 wins. The 2012 team is tied for third in school history with 13 victories.

Northeastern State opened the season with a program best 11 match winning streak and rose as high as number-19 in the nation, and spending several weeks in the NSCAA National Poll.  The RiverHawks finished the season with 13 wins which matched for third most in program history, and they finished fourth in the MIAA standings.  In the postseason, NSU had three all-region players, six named as All-MIAA, and its first Academic All-American with Jordan Woodruff being selected third team by the College Sports Information Directors of America (CoSIDA).

The 2015 club made history by becoming the first Northeastern State women's soccer team to advance to the finals of a conference tournament. NSU won its quarterfinal match and then advanced to the championship after winning a shootout in the semifinals. The RiverHawks placed third in the MIAA with a 7-3-1 league record, while boasting three all-region players and a school-record eight all-conference performers. For his efforts, Wooten was named the MIAA Coach of the Year. Northeastern State scored 56 goals, which was second in the MIAA and second-most in a single season in school history. The RiverHawks also conceded just 18 goals and led the conference with a school-record-tying 55 assists. The RiverHawks earned a regular-season shutout road victory over then-No. 8 Central Missouri, which was the first win by NSU over UCM since 1998 and the highest-ranked team NSU had ever defeated in school history.

The 2014 season saw NSU qualify for the MIAA Championship for the third-straight year. The RiverHawks posted an 8-11 record and a 5-9 mark in the MIAA, which was good for eighth place in the league. The team tallied five All-MIAA performers and one all-region player.

The 2013 team broke the school record for most wins (15) and best win percentage (.789) in a single season, while tying the all-time mark for fewest losses in a single campaign (4). The squad boasted four first-team all-region performers and the MIAA Goalkeeper of the Year. NSU finished runner-up in the MIAA at 8-3 in the conference, which was the best league placement in school history. The RiverHawks also competed in the MIAA Championship, advancing to the quarterfinal round. They posted a 2-0 victory over Central Oklahoma late in the season, which was the first victory over their rivals in 14 years. NSU led the MIAA in shots (399) and goals-against average (0.74), while finishing third in goals (32), assists (28) and points (92).

The 2012 campaign marked the beginning of a new era as NSU competed in its first year as members of the Mid-America Intercollegiate Athletics Association. Wooten led NSU to a fourth-place finish in the regular season and a berth in the MIAA Championship semifinals. The team finished 13-5-1 overall, tying the then-school record for most wins in a single season and recording the second-fewest losses in a single campaign. The team also broke the then-school record for best winning percentage (.711). In their first year in the league, the RiverHawks led the conference in all major offensive statistical categories, including shots per game (19.7), goals per game (2.26), assists per game (1.74) and points per game (6.26).

Northeastern State was an independent in 2011 and finished the year with an 11-4-3 mark. The team embarked on a 9-0-1 streak early in the campaign and set the school record for fewest losses in a single campaign.

The 2010 season was the final year for NSU in the Lone Star Conference, and Wooten led the team to a 7-6-5 record.

During his six seasons at Northeastern State, Wooten has coached 22 all-conference selections, 18 all-region performers and one MIAA Goalkeeper of the Year. He has also had 71 MIAA Academic Honor Roll recipients, eight MIAA Scholar-Athletes and six MIAA Academic Excellence award winners.

The former head coach at Centenary College and an assistant at the University of Alabama has brought a wealth of NCAA Division I coaching experience to the Tahlequah campus.

Wooten, who served as head coach of the women’s program at Centenary for six years (2003-09), led the Ladies to two Summit League semifinal appearances and had three players named Summit League Players of the Week. He also had several all-conference and freshman all-conference selections.

During his tenure at Centenary, Wooten placed a high priority on academics and every team obtained a 3.25 grade point average or higher.

Wooten served as assistant women’s coach at the University of Alabama from 2001-03. He was the Crimson Tide’s recruiting coordinator and served as the goalkeeper trainer. The Tide’s 2001 team had the sixth most-improved record in the nation.

He was the boys head goalkeeper trainer for the Alabama Olympic Development Program during his time at UA.

Wooten coached high school soccer at Caddo Magnet High School in Shreveport from 1996-98, where he served as head coach and assistant coach of both the boys and girls programs. His girls program placed second in the Class 5A State Championship in 2001, won district titles and Wooten earned District Coach of the Year in 2000 and 2001. They were listed among the Top 50 girls teams in the nation in 2001 by Fox Sports.

Wooten’s boys teams were district champions three consecutive years from 1999-01. He was also selected as district coach of the year in 1999 and 2001.

He played at Centenary College from 1995-98 where he was a goalkeeper and the 1998 male student-athlete of the year. He also played at Lindsey Wilson College from 1994-95 before transferring to Centenary, where the Columbia, Ky., school reached the NAIA Final Four.

Wooten and his wife, Amber, have one daughter, Catherine. 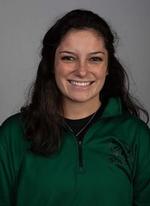 The 2019 season is the first for Meg in the graduate assistant position for the NSU women’s soccer program.

Smith joined the coaching staff after graduating from NSU in December of 2018, and after playing four and one half years under Chase Wooten.

While playing with the RiverHawks; the Flower Mound, Texas native recorded seven shutouts with a 0.83 goals against average, was named All-MIAA Honorable Mention, and went 13-3-0 in front of the net in the 2017 season.

Smith was also a part of the Student-Athlete Advisory Committee during her time at NSU, and graduated with a BBA in accounting. She is now working towards her MBA in accounting.